What’s new and coming in TOTAL for Mobile

Written by Tracy Boehrer on November 3, 2015 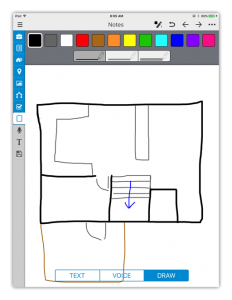 This release adds the Disaster Inspection form. Over the coming releases, we're going to be adding a number of highly requested forms like the ERC. We're also adding rental and listing support to existing forms, like Small Income. Both rentals and listings will support photos just like Sales Comps do.

There are other forms on the shortlist too. Like the 69E Evaluation form, construction inspection, and 1004D. If you have ideas on which forms you'd like to see, e-mail us at feedback@alamode.com.

Any multi-line field can now be expanded to make editing these fields easier. The next update will insert QuickList selections at the cursor position, allowing you to quickly create a detailed narrative with multiple QuickLists into a large block of text without typing.

Freehand Drawing has been going through a makeover. This update adds support for changing the pen color and pen width, as well as the ability to pinch and zoom to create more detailed drawings. This is just the beginning though — future versions will also support the ability to annotate photos and sketches.

TIP: We get a lot of requests to have eraser functionality. We're looking into it, but as a workaround for the meantime, you can set the pen color to white and draw over lines to hide them.

This version corrects a number of issues related to iOS9, including correcting how SmartStart is displayed and the Paste function in the Sketcher. Moving forward, future versions will add support for the new iOS9 split view on iPad Air 2 and iPad Pro tablets. What this means for you is that when using either of these tablets, you'll be able to open TOTAL for Mobile in one window, and another app in a second window, like a notepad or ToDo list.

Don't have TOTAL for Mobile? It's available for free on the Apple App Store, Google Play, and the Amazon App Store.