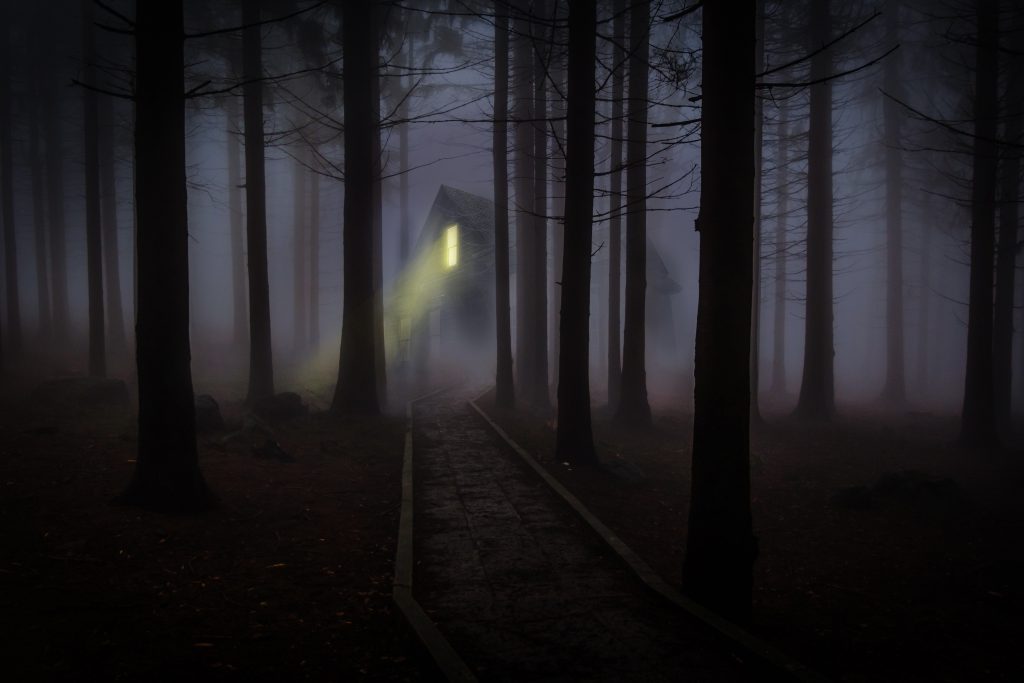 On a cold, windy evening in October, Joe, an appraiser of 30 years, headed toward his last inspection after a long day. It was the house on Bates Avenue. The one everyone in town said was haunted. Of course Joe didn't believe in such things.

In fact, he felt most stories about haunted homes, ghouls, and ghosts were hopelessly unoriginal and rather trite. So he headed to the inspection without so much as a second thought to its apparitional rumors. However, he failed to notice the sky grow darker as he approached the home on 1401 Bates.
After parking his car under a nearly-black sky, he approached the front door and knocked. Ever so slowly, the ancient door swept backward. Its hinges creaked loudly, punctuating the silence as Joe watched from the porch.
"Hello?" Joe said.
"Yes, come in," said a hoarse voice from behind the door. Joe stepped across the threshold. The whole house was dark, he couldn't see a thing, much less the mysterious person who let him in.
"Uh hi, my name is Joe. I'm here to do your appraisal inspection," Joe said to the darkness.
"Ah yes, the inspection," said the voice.
"Yeah… could we flip on some lights? I can't do the inspection in the dark."
"Of course." A lamp suddenly flipped on across the entryway, shining light on the man with the scratchy voice. He was decrepit. He stood hunched over, causing what little gray hair he had left to fall in stringy strands in front of his eyes. He looked Joe up and down, "Please, begin the inspection."
"Right… okay," Joe said, unlocking his tablet. He started going through his normal procedure with TOTAL for Mobile. But as he walked away from the front door and the frightening homeowner, the old man spoke up again.
"Beware as you walk through this house," he said.
"Excuse me?"
But the old man didn't respond, he simply shuffled out of the entryway and into the pitch darkness of the rest of the home, where Joe's eyes couldn't see. He shrugged it off and began his measurements.
With the house so dark, he struggled to find light switches (and the few that he found didn't work), so he kept his phone flashlight on to find his way.
As he made his way upstairs, the air in the house grew colder, making goosebumps appear over Joe's arms. He did start to get an uneasy feeling about this house on Bates Avenue. He flipped on the voice-to-text feature in his app to dilute the deafening silence. As he talked through his notes, he felt a little better. But when he went to point his DISTO down the hallway wall, his laser light flickered, as if a figure had walked in front of it.
Joe tried to think about other things. He kept taking his notes verbally, not caring if the homeowner heard him talk about the poor condition of the house.
He turned a corner into a bedroom and his laser flickered again. This time he heard footsteps shortly after. They were approaching behind him at a steady pace. Was it the homeowner? He wondered. No, the steps were moving much faster than that feeble man had gone in years, he was sure.
"Hello?" He called out.
The steps stopped. Joe reluctantly peaked his head out of the room. He saw nothing and turned back toward the room. But he stopped in his tracks…
A cold hand landed on his shoulder. "Are you here to stay?" A seething voice sputtered through a smile that was anything but happy. And Joe began to scream.

Darkness falls on our autumn sale at midnight tonight. Be sure to get your savings before it's too late. Use promo code FALL100 to save $100 on any new product $199 or more.