The perils of buying a cheap Android tablet 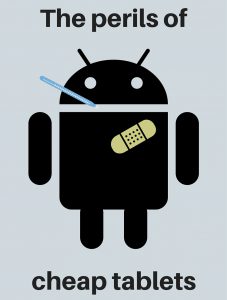 Paul is one of our Appraisal Product Instructors. He's an expert on a la mode software and mobile workflow solutions, and is an unabashed gadget hound and device geek. He's taught hundreds of classes over the years to appraisers and is recognized as a leading authority on using laser measurement tools in appraisal work. Catch him in-person at an upcoming a la mode Roadshow event by registering online: http://workshops.alamode.com.

I love gadgets. Part of what I love most about getting to teach our mobile classes is the fact that I get to play with all the cool toys so that I can more effectively explain them to customers.

I've also heard some pretty gnarly horror stories from folks who bought the wrong device, for the wrong reason, and then were very unhappy with their experience. It’s an easy mistake to make if you’re not a technical person by nature, and this is especially true when you’re talking about Android™ tablets. Because there are SO many Android devices on the market, it can often be confusing or overwhelming trying to pick the “right one”. So, many people fall back on price as their major deciding factor.

The fallacy of “cheap”

For many people, price becomes the primary criteria for a number of reasons. They’re not convinced that the process will actually save them any time or money, or want to “dip their toes in” to see if they can actually make it work, but don’t want to spend a lot of money just “trying” out mobile and paperless inspecting. For others, they feel like they can’t afford a more expensive device.

But price is a poor primary deciding factor when you’re talking about a tool you’ll use every day to get your work done. The problem with buying on the cheap is that in many cases, you are essentially creating a self-fulfilling prophecy. When you buy cheap, you usually get poor performance or overall poor results, which then sours you on the process overall and just reaffirms in your eyes why you shouldn’t have done this to begin with. You really have to look at the money you spend on these types of tools as an investment, rather than just an outright cost.

So what are some of the more common problems associated with buying a cheap or budget Android device? Here’s a short list of ones that are worth being aware of as you begin shopping for your first (or next) device:

Generally speaking, the simplest advice I give most customers looking to purchase a pocketbook-friendly Android device is to stick with a name brand that you recognize. All the big name players, like Samsung, ASUS, Dell, etc., all offer devices ranging from $99 and up. But honestly, $99 really should be the bottom of your pricing barrel if you want to have any hope of getting something that you can actually use in the field. For another $50, in the $149 range, both Samsung and Dell make devices that make CNET’s “Best budget tablet” list.

How do you ensure that you’re happy and productive with your new Android tablet?

Hopefully by now you begin to see why a cheap Android tablet may not always be in your best interest. Understanding the difference between the cost of a device and the investment you’re making into your business by purchasing something better is critical.

As always, if you have thoughts or comments on this, I’d love to hear them. Send them over to me at MobileExperts@alamode.com, or come see me in person at one of our events!